How (and When) To Use Tek Screws. They're cost-effective, and when done right, easy to use. Here's how to know when (and how) to use them. Ditch the drill. With Tek screws, you won't need it. If you've worked in the electrical industry, you're probably already familiar with Tek screws. But if not, we're here to clarify.

Tek screws are a great way to remove some extra steps and reduce the time it takes to complete a project.

That's because they drill, tap and fasten without using a drill. The tip of a Tek screw is called the drill tip. There's a small carving piece at the end of the screw that's used to make a small hole in a surface by first tapping the screw against the surface before driving it in. This not only makes for a better starting point for drilling the screw, but it also saves time by getting rid of the need to drill a hole before putting in a screw or waiting for the thread to catch.

The name Tek is actually a brand of self-drilling screw, but has now become synonymous with the style of screw.

Much in the same way you might Xerox something to copy it. Whatever the case, Tek screws are quickly becoming essential hardware for any toolbox.    There are several options in Tek screws. They will vary by size and type to facilitate projects requiring a pre-drill hole.

The size will vary similar in the same way size varies for an actual drill. Tek screws are identified by the size of the drill tip. The length of the screw and the type of tip will be dictated by the thickness of the material being used.

Again, just as with other screws, Tek screws come in a variety of types. Head styles include: There are other head styles as well. Drive options are Phillips, hex, and square.

As stated earlier, Tek screws are commonly used in the electrical industry. But they are also used in a wide variety of other sectors including but not restricted to roofing, light carpentry, and major machinery functions. They are often used for attaching metal to metal or metal to wood. They are most commonly used in thin metal applications where one might be working with steel studs. They frequently have a washer seated under the head. These washers can help to seal against water damage - particularly in applications where this might be an issue, such as steel roofing.

There is a difference between Tek screws and self-tapping screws.

Self-drilling screws or Tek screws are for metal-to-metal or metal-to-wood only and typically do not work well in just wood. Self-tapping screws work well in all materials, but will likely need a pilot hole in many applications and thus may require a drill. When your metal project calls for a collection of screws, the time saved by utilizing Tek screws can equal price savings too. So if you're working with metal and you want to save time - and money - a Tek screw may be the way to go. They're an excellent option with many different applications. 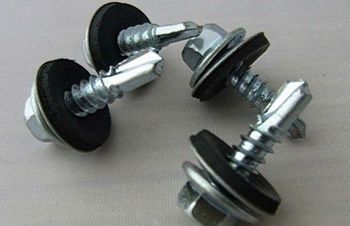